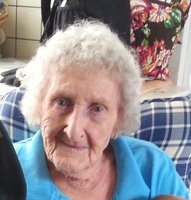 Lawella A. Rogers, 97, of River St., Canaseraga, NY, passed away on Sunday evening, June 14, 2020 at the home of her granddaughter in Livonia. Lawella was born on March 19, 1923 in Pennsylvania to John and Vera Hatch. She grew up in Bradford County, Pennsylvania and married Cecil M. Rogers who preceded her in death on May 9, 1981. Lawella and Cecil eventually settled in Hedgesville (Town of Woodhull), where they operated their family farm together. While living in Woodhull, she was employed by Corning Glass Works as a night cleaner while at the same time tending to her duties on the farm and at home. They then settled in Canasaraga where Lawella has resided since. She enjoyed tending to her flowers and adored time spent with her loving grandchildren. She is survived by her sons, Wesley Rogers of Woodhull and George Rogers of Wisconsin, her daughters, Sandra Tillitson of North Carolina, Ida Mae Aldrich of Geneva and Roberta Walravens of Livonia, 9 grandchildren, including her granddaughter, Sheina Meyer with whom she was residing, several great and great great grandchildren and nieces and nephews. Besides her husband Cecil, Lawella was predeceased by her grandson, James Rogers and her siblings, Donald, Norman, Elmer and Eleanor. Following Lawella’s wishes, there will be no services. She will be laid to rest next to Cecil in Woodhull Cemetery.