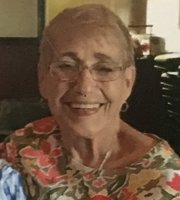 HORNELL: Barbara A. Hicks, 87, of Duane Street, passed away Saturday afternoon June 13, 2020 at St. James Hospital following a brief illness. Barbara was born November 11, 1932 in Hornell to the late Carl R. and Catherine E. (Bowles) Roosa. On March 17, 1956, she married Joseph D. Hicks who predeceased her in September of 1998. Barbara was a former bus driver for the Hornell City School District for many years and retired from the Aquinas Center of St. James Mercy Hospital in 1998. Barbara is survived by her four sons, Joseph Hicks of Hornell, Michael (Elaine) Hicks of Hector, Timothy (Yvonne) Hicks of Oriskany Falls and Daniel Hicks of Hornell. She is also survived by 5 grandchildren 4 great-grandchildren, a sister Delores (Robert) Gerhart of Bath, one brother Carl Dan (Donna) Roosa of Magnolia, Delaware, brother-in-law Donald (Betty) Merring of Canisteo and several nieces and nephews. She was predeceased by a sister Marcia Merring in April of 2011. There will be no calling hours or services at this time. A celebration of life will be announced at a later date.