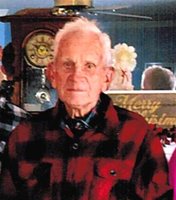 Durland R. “Dewey” Weale, 98, passed away peacefully in the comfort of his home on Cleveland Drive in Addison on Wednesday, September 30, 2020. He passed in the presence of his loving daughter Alice and grandson Zach. Dewey was born in Corning on May 9, 1922 to Robert and Ruth Barnard Weale. He was raised on a dairy farm in Lindley and attended area schools. Dewey was a 1940 graduate of Corning Northside High School. Following high school he attended Cornell University where in 1944 he earned a Bachelor’s in Science in Agriculture. During the time that he was attending Cornell, he was also employed by Corning Glass Works. After graduation, Dewey accepted a teaching job in Sherman, NY where he taught agriculture for two years. On August 17, 1947, Dewey and the former Martha E.L. Laffkas were married in Addison and they shared nearly 67 years together until Martha’s passing on June 9, 2014. He then was hired by the Addison School District in 1948. Dewey, through part time studies, earned a Masters Degree in Agriculture from Cornell University in 1953. Following two decades in the Addison School District, Dewey’s career in education led him to the newly created BOCES program in Steuben County. He accepted the position of administrator of the BOCES program in the Corning area. Upon its inception, various programs were offered at several different locations in the area. He led the building project for what became the Coopers Career Center in Coopers Plains which provided a central location for existing and expanding programs offered in the BOCES system. During the 1972 flood which devastated the region, Dewey coordinated a distribution center for goods and supplies to victims of the flood with Coopers Career Center being the point of collection and distribution of needed items. Dewey retired from SGT BOCES in 1980. Following his retirement, he became involved with a training program at Ingersoll Rand Co. in Painted Post. For 10 years, Dewey would train foreign customers in the proper use and maintenance of large compressors and pumps purchased by customers from other parts of the world. This often meant a meal at the home of Dewey and Martha during the time of their visits. Dewey had a lifelong love of old cars, particularly Model T Fords. As a young child on the farm, he learned to drive the family’s Model T while transporting his physically disabled father back and forth to the barn for twice daily milkings.In the late 1940’s, Dewey spotted an old abandoned Model T that was owned by Sam Perkins. He was able to purchase this 1915 model and he, with much determination and mechanical ability, restored the car that he nicknamed “Sam” to its former glory. He and Martha or his daughter Alice would often participate in regional parades and competitions with Sam. Dewey and Martha were long time members of the Chemung Valley Antique Auto Club of America. Over the years, Dewey acquired a total of four Model T Fords. A great historian, Dewey was often asked to share stories of local history to various groups in the area. He was a member of the Lindley-Presho Historical Society. He was also a member and Past Master of Union Lodge 118 F&AM in Addison. Dewey was well known for the wonderful vegetable gardens which he raised every year and that he would gladly share with friends and neighbors. He also grew beautiful Dahlias which were a source of great pride for him and would be treasured bouquets given to ladies in the area who were celebrating special occasions. Dewey is survived by his daughter, Alice Weale of Addison, his granddaughter, Jessica Weale of Palm Beach, FL and his grandson, Zachary Weale of Princeton, NJ. Besides his wife Martha, Dewey was preceded in death by his son, Peter Weale on March 25, 2017 and by his brothers, Dean and Marion Weale. A memorial service will be planned for a later date with burial in Addison Rural Cemetery.