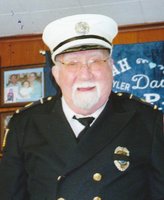 CANISTEO: Rodney L. “Rod" Knight, 92, of Eighth St. passed away Sunday, February 14, 2021 at Strong Memorial Hospital in Rochester following a brief illness. Born September 7, 1928 in Canisteo to the late Ernest J. and Louella (Evingham) Knight, Sr. On March 11, 1950 in Cortland, N.Y. he married the former Mary E. Finney who predeceased him in 2009. Rod was a life-long resident of the Canisteo Valley who left school early and enlisted in the U.S. Army serving our country proudly from 1946-47 and later earned his GED. A carpenter by trade he worked as construction superintendent for the former Hollands Lumber Co. in Hornell for several years. He was a member for 56 years and past president of the Carpenter’s Union Local #66 out of Olean. Locally he was a member of the Canisteo Fire Dept. and Company for better than 60 years where he held the office of fire chief from 1972-77. He was a member of Morning Star Lodge #65 F&AM, the Canisteo American Legion and a life member of the Hornell VFW. Rod was an avid outdoorsman who enjoyed hunting and fishing with family and friends. He also enjoyed gardening and watching sporting events on TV and rooting for the Buffalo Bills. His greatest passion was spending time with his family which meant a great deal to him. Rod is survived by two daughters Patricia Knight of Seabrook, TX. Diana (Randall) VanAllen of Canisteo, one son Richard “Dick” (Connie) Knight of Canisteo, 5 grandchildren: Dawn (Brian) DuBois, Juliana (Gary) Smith, Katrina (Brett) Hurd, Katelyn Knight and Karina Kelly, 8 great grandchildren: Tyler, Diana and Brandon Smith, Jazmyn and Jozlyn Dubois, Allie and Noah Hurd and Grayson Knight. He is also survived by two sisters, Carol Ritter of Hornell and Marjorie Henry of Canisteo, sisters-in-law Pearl Knight of Canisteo, Mabel Knight of Andover, Marjorie Knight of Corning and Roberta Knight of Avoca, his close friend Mable Beers and her family who were a big part of his life in the later years. Rod was predeceased by his brothers Archie Knight, Ernest J. Knight, Jr., Jack Knight, John Knight and Gary Knight and two sisters, Doris June Knight and Linda Bacon. The family will receive friends from 2-4 pm Thursday at the H.P. Smith & Son, Inc. Funeral Home in Canisteo, where funeral and committal services with military honors, will follow calling hours at 4:00 pm. Burial will be in Hillside Cemetery in Canisteo. Memorial contributions in Rod’s name may be made to the Canisteo Fire Dept. Building Fund, 14 South Main St. Canisteo, N.Y. 14823.