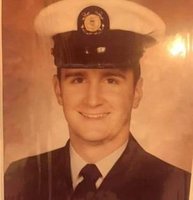 Timothy K. Stapleton, 62 of 174 E. 2nd Street, Corning NY, entered into rest on Thursday, February 18th, 2021 at his home. Born in Muskogee, OK on September 25th, 1958, Tim was the son of Thomas H and Clydia L (Hesson) Stapleton. He graduated high school in Kansas City, KS and attended college at Kansas State. Tim was a proud Veteran of the US Coast Guard and during his 20 year US Coast Guard career he was awarded 5 Bronze Stars, various commendation ribbons, the Armed Forces Expeditionary Medal, the Humanitarian Service Medal and the Coast Guard Special Ops Service Ribbon as well, as several Good Conduct awards. He was involved in the making of the James Bond Movie “License to Kill”, was an avid sailboat captain, and scuba diving instructor over the years. He made an impact on everyone he met, and his ability to remain calm and clear-headed was rivaled only by his adventurous spirit. Most of his lifetime was devoted to “Helping Others”. On March 28th, 1999 he married Dorothy (Dottie) M. Hamblin on Halouver Beach, Bal Harbour, Fl. Dorothy still survives. Tim is also survived by his daughter Andrea Townsend of Granbury TX, his son Thomas (Barbara) Stapleton of Haslet, TX, his daughter Taylor (Max) Billard of Jacksonville, FL, his son Grant Giles of North Carolina, and his daughter Stephanie Pratt of Middletown, CT, his step-son Raymond Dann and step-daughter Michelle (Ryan) Beard, both of Elmira, NY. His grandchildren Connor, Tommy, Clabe, Ariana, Kingstyn, River, and Henry, his sister Kim (Eddie) Johnson of Venice, FL, stepbrother Jimmy Calohan of AR, Aunt Jean Stewart of Davenport, IA as well as many nieces, nephews, and cousins. Tim was predeceased by his parents Thomas and Clydia Stapleton and his sister Kelly Reynolds. Friends and family may attend a Military Service on Sunday, February 28th, at 2 pm, at the Woodhull Cemetery 5404 St Rte 417, Woodhull, NY with Pastor Lorri Thornton officiating. There will be a Celebration of Life at the VFW Post 524 on 281 Baker Street, Corning, NY beginning at 3 pm. Burial will be at sea at a later date.