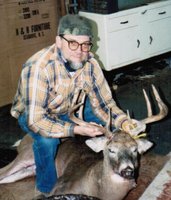 Hornby: William R. Cody, 86, of Dyke Road, Corning, NY, Town of Hornby, passed away at home on Tuesday, March 23, 2021 following a battle with cancer. Bill was born in Hornby on February 19, 1935, the son of the late Merton E. and Dorothy M, (Stevens) Cody, He took pride in his being a lifelong resident of Hornby. He attended Northside High School in Corning. Bill married the former Arloween Rude on June 7, 1958. She preceded him in death on December 17, 2013 after 55 years of marriage. Bill began a long career with Corning Glass Works at 17 years of age. He retired with over 40 years of active service. As a young man, he served in the National Guard. Following his retirement, he and friend Ken Pierson operated a lawn care and snow removal business together for 25 years. He loved to ride snowmobiles and motorcycles and did so most of his adult life. He had been a member of the Hornby Snowmobile Club. Bill was also an avid deer hunter. He and Arloween loved to travel and had visited all US states except Hawaii. Surviving are his sons and daughters in law, Charles and Michelle Cody of Beaver Dams, NY and Jonathan and Judith Cody of Ft. Worth, Texas, 3 grandchildren, 8 great grandchildren, 3 great great grandchildren, step sister, Charlotte Clark of Avoca and several nieces, nephews and cousins. Besides his wife Arloween, Bill was predeceased by his brother, Bud Cody and his sister, Shirley Stutzman. Following Bills wishes, there will be no public services. He will be laid to rest with his wife Arloween in Woodhull Cemetery. Arrangements are with the H.P. Smith & Son Funeral Home in Woodhull, NY.