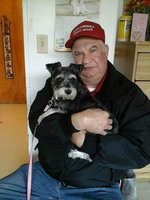 Paul E. Taft, 66, of Church Hill Road, Woodhull, NY, passed away at home very suddenly on Tuesday, May 18, 2021. Born at home in Woodhull on April 10, 1955, Paul was the youngest of the late Lawrence E. and Gladys B. (Impson) Taft. He attended Woodhull Union Free School before transferring to Jasper Central School from where he graduated in 1973. On May 15, 1976, Paul and the former Peggy Sue Mayo were married in Jasper. As a young man Paul worked with his father in the operation of the family dairy farm in Woodhull. In 1988 he started a 32 year career starting with Crowley’s Foods and later H.P. Hood in Arkport from which he retired last year. Paul enjoyed being outdoors and participating in such activities as hunting, fishing, cutting firewood and bee keeping. He enjoyed a game of euchre or loving on the many dogs which he and Peggy shared over the years. He was a hard working husband and father and was dedicated to providing for his family. He dearly loved and took great pride in his sons and grandchildren. Paul is survived by Peggy, his wife of 45 years, his sons and daughters in law, Colin and Teresa Taft and Justin and Julie Taft, all of Woodhull, his grandchildren, Connor Taft and Liberty Taft, his siblings, Richard (Jean) Taft of Addison, Floyd (Marguerite) Taft of Woodhull, Dorothy Watkins of Woodhull, Julia “Judy” Cooney of Addison, Fred (Cindy) Taft of North Carolina, Edith (Robert) Sarviss of Addison and Roger (Joyce) Taft of Cameron along with many nieces, nephews and cousins. Following Paul’s wishes, there will be no visitation or services. Those wishing to make memorial donations may direct them to the Finger Lakes SPCA in Bath, the American Heart Association or the American Diabetes Association. Arrangements are with the H.P. Smith & Son Funeral Home in Woodhull, NY.