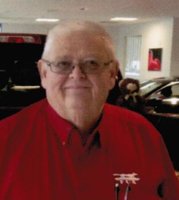 Charles E. Carpenter Jr., 69, of County Route 5, Addison, NY, passed away at home on Friday, May 28, 2021. Chuck was born in Wellsboro, PA on May 11, 1952, the son of the late Charles E. and Arlene J. (Smith) Carpenter. Raised in Tuscarora, he was a 1970 graduate of Addison Central School. In his youth, Chuck had worked on area farms. On September 15, 1973, Chuck and the former Wilda Montgomery were married in Marsh Creek, PA. Wilda survives. Following high school, Chuck was employed at the Ann Page Foods Plant in Horseheads until its closing. He then worked at Ingersoll Rand in Painted Post for a period of time. He found his true calling when he began a career of over 35 years in auto sales. He started by working for Whitcomb Ford and later Fox Auto Group in Gang Mills. While there, Chuck developed some wonderful long time relationships with customers and co workers. In his free time, he enjoyed hunting rabbits, deer and pheasants. Surviving Chuck is his wife of over 47 years, Wilda Carpenter of Addison, his daughters and sons in law, Joyce and Theo Wheaton of Deland, FL and Joan and Joe Goodman of Painted Post, his grandchildren, Alyssa Ryan, Daniel Ryan, Ben Goodman and Alex Goodman, his brothers, Mark (Julie) Carpenter of Mechanicsburg, PA and Brad (Mel) Carpenter of Texas, a niece and nephew, his aunt and uncle, Jean and Bob Snyder of Painted Post, his beloved beagle, Rusty and best friends, Jim Hall, Zack Jones and Mitch McNeil. He was preceded in death by his parents, Charles and Arlene Carpenter, by his son, Jeffrey Carpenter on Sept. 30, 2006 and by his nephew, Derek Carpenter. The family will receive friends on Wednesday, June 2nd from 2:00 to 4:00 pm at the H.P. Smith & Son Funeral Home, 1607 Main St. Woodhull, NY. A memorial service will follow there at 4:00 pm with Rev. Curtis Hall officiating. Chuck will be laid to rest next to his son in Woodhull Cemetery.