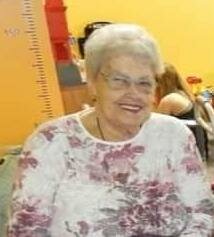 Please share a memory of Margaret to include in a keepsake book for family and friends.
View Tribute Book
Margaret F. Jones, 88, a resident of Absolut Care of Three Rivers in Gang Mills, formerly of Addison, passed away on Friday, November 26, 2021 at Absolut Care. Born in Lindley, NY on November 25, 1933, Margaret was the daughter of the late Carl M. and Lillian Faye (Miller) Terwilliger. She was a 1951 graduate of Alfred Almond Central School. She worked for a short time following graduation for the Ingersoll Rand Co. in Painted Post. On July 9, 1955, she married Malcolm D. Jones. He preceded her in death on November 25, 2009. When first married, Margaret and Malcolm lived in New Mexico while Malcolm was serving in the US Air Force. They returned to Steuben County to make their home where Margaret worked for Corning Glass Works as a payroll clerk. She served the Town of Addison as town clerk, holding that position for 14 years. She had also worked at the Addison School cafeteria as well as at the Erwin Laundromat. Margaret was a devoted member of the Addison Presbyterian Church for over 40 years. She also was a member and Past Matron of the Tuscarora-Woodhull OES Chapter. Surviving are her sons, Stephen Jones of Campbell and Kevin Jones of Addison, her grandchildren, Michael (Nicole) Jones, Zachary Jones, Mitchell Jones, Lauren Haley, Kristi Jones, Stephanie (Anthony) O’Sullivan, Samantha Jones and Megan Jones, her great grandchildren, Dakota Haley, Carter Haley, Nykolas Michael, Kelsey Jones, Carson Jones, Hazelee Ring, Colby Jones, Caden Atwood and Lillian Atwood, her brothers, Richard Terwilliger and Elwin (Helen) Terwilliger, all of Addison and several nieces and nephews. Besides her husband, Malcolm, Margaret was predeceased by her son Mark Jones in 1967. Visitation will be held on Wednesday, December 1 from 1 to 2 pm at the H.P. Smith & Son Funeral Home, 1607 Main St. Woodhull, NY. Services will follow there at 2 pm with Rev. Peter Marr officiating. Burial with graveside services will follow in Addison Rural Cemetery.
Wednesday
1
December