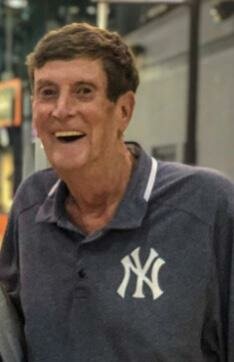 Please share a memory of James to include in a keepsake book for family and friends.
View Tribute Book
PALMYRA: James J. “Jim” Norton, 69, of Conifer Rd. formerly of Almond, NY, passed away December 8, 2021 at Strong Memorial Hospital following an extended illness. Jim was born May 3, 1952 in Hornell, to the late Eldon and Mary Ann (McCormick) Norton. Jim had been employed as a telecommunications technician for Creative Solutions of Bath. He had previously been employed with Frito Lay and Troyer Farms as a potato chip salesman. He will be remembered as a dedicated father and papa who enjoyed spending time with his daughters and grandchildren. Jim is survived by three daughters: Krislyn Norton of Palmyra, Kelli Norton (Luis Romero) of Victor and Katie (Jeff) Englehart of Farmington. Four grandchildren, Alivia Norton and Jayce, Liam & Carter Englehart and two on the way, who Jim nicknamed Tator & Tot! He is also survived by three sisters, Carol Norton-Kull of Almond, Linda (Joel) Ordway of Canisteo and Debbie (Erik) Jacoby of Farmington. In addition to his parents, Jim was predeceased by two brothers, Gregory and Douglas Norton. Per Jim’s request there will be no calling hours or service at this time. A celebration of life will be announced at a later date. Arrangements are with the H.P. Smith & Son, Inc. Funeral Home in Canisteo. Memorial contributions in Jim’s name may be made to The Greg Norton Memorial Scholarship Fund, AA Alumni Association, PO Box 1134, Alfred, NY 14802.

A Memorial Tree was planted for James
We are deeply sorry for your loss ~ the staff at H.P. Smith & Son, Inc. Funeral Home - Canisteo
Join in honoring their life - plant a memorial tree
Online Memory & Photo Sharing Event
Online Event
About this Event