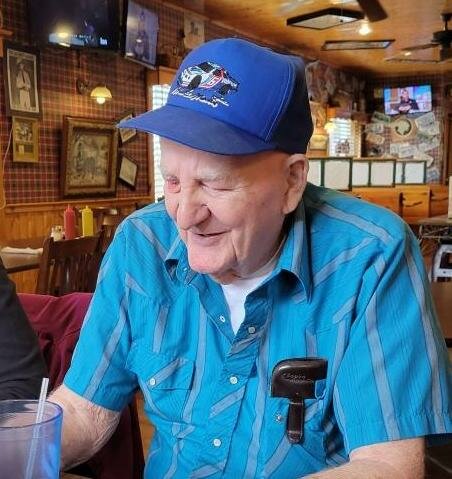 Please share a memory of Leon to include in a keepsake book for family and friends.
View Tribute Book
Leon K. Hackett, 91, of Corning, formerly of Addison and Woodhull, passed away on Friday, July 1, 2022 at Corning Hospital following an acute illness. Born in Corning on April 14, 1931, Leon was the son of the late Elmer and Anna Swan Hackett. He was raised in Woodhull and attended school there. He enlisted in the US Army following high school but was discharged early to assist his mother in the operation of their business when his father died suddenly. He continued his military service as a US Army reservist, satisfying that part of his military commitment. Leon was born into a trucking family and spent a good share of his life as a truck driver. On June 21, 1951, Leon and the former Shirley J. Reynolds were married at the First Baptist Church of Woodhull. He had held positions as a young man at Corning Glass Works and Ingersoll Rand Co. He got back behind the wheel of trucks when working for the Steuben County Highway Department. From there, Leon spent several years driving for Keith Paddock & Son in Jasper. Leon and Shirley moved to Wyoming and Leon worked as a driver there in the petroleum industry. He retired from Diamond Shamrock Corp. in Wyoming. After several years in the west, Leon & Shirley returned to this area in retirement. Leon was a former member of the Woodhull Fire Department. He always enjoyed coffee every morning with his buddies in Woodhull. Shirley preceded Leon in death on May 13, 2014. He was also predeceased by his parents, Elmer and Anna Hackett and by his brother, Walter Hackett in 2015. Surviving are his children and their spouses, Barbara and Tom Pepper of Addison, Kathie and Dave Clark of Phelps, NY, Sandy Berry of Evans, CO and Steven and Helen Hackett of Pueblo West, CO, his grandchildren, Amy (Jason) Stevens, Joe (Melissa) Berry, Nicole Steele, Jamie Berry, Steven Hackett and William Hackett, his great grandchildren, Kenneth Stevens, Jane Stevens, Wesley Steele, Jaden Steele, Rylee Berry and Addison Berry, his brother, Gilbert Hackett of Rushford, NY along with several nieces and nephews. The family will receive friends on Thursday, July 7 from 10 to 11 am at the Woodhull Cemetery Chapel on the grounds of Woodhull Cemetery. Memorial services will follow there at 11 am with Leon’s friend, Rev. Brian Diffenbacher officiating. Burial will be in Woodhull Cemetery. Memorial donations are suggested for the Woodhull Fire Department, 5193 W. Main St., Woodhull, NY 14898. Arrangements are with the H.P. Smith & Son Funeral Home in Woodhull.
Print
Thursday
7
July