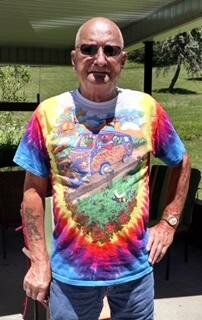 Please share a memory of William to include in a keepsake book for family and friends.
View Tribute Book
CANISTEO: William L. “Bill” Westbrook, 90, of East Main St. passed away Sunday morning, January 8, 2023 at St. James Hospital. Bill was born April 18, 1932, at Bethesda Hospital in Hornell, to the late Stanley and Madeline (Comfort) Westbrook. He was a graduate of Canisteo Central School class of 1950 and was a veteran of the U.S. Navy serving our country proudly during the Korean War from 1949-53 on the USS Meredith. Bill had been a surveyor for the Cold Springs Construction Company out of Akron, NY for several years. Outside of his employment he was a member of the Canisteo American Legion, and was a great lover of music. He was a great fan of Elton John, and loved to play his music loud! He was a founding member and drummer for the band “Bruce Porter and the Bellhops” in the late 50’s and early 60’s. Bill was always young at heart and ready for a party. His house was always a place to stop and have a beer. He will be greatly missed by all that knew him. Bill is survived by a daughter Tracy Lehman of Bolivar, a son Russell Westbrook of Hornell. Grandchildren, Zane Lehman, Anthony (Bree) Westbrook, Collin Westbrook, great-grandchildren, Paige, Leigha, Emmalee, Elana, Zoey, Kinsley, and Huxley. He is also survived by two sisters, Mary Lou Brown of Canisteo and Patricia Falzarano of Hornell, two brothers, James (Patricia) Westbrook of Canisteo and Stanley Westbrook of FL., nieces and nephews Jeff and Steve Brown, J.P. Falzarano, Sandy Westbrook, Ginger Parker, Pam Westbrook-Dool, and Michelle Valentine. Bill’s adopted daughters are Susan Zapata Patrick, Midge McChesney, Clair from China and all of Tracy’s other girlfriends, Tabbie Rinaldi his caregiver and drinking buddy, special companion and partner in crime Joni Vallieres, and his former wife and friend, Cheryl Mueller. Bill was predeceased by a grandson Russell J. Westbrook Jr., 2 brothers-in-law Don Brown and James Falzarano, and one sister-in-law Martha Westbrook. Per Bill’s request there will be no calling hours or service. I’m sure he was welcomed at the pearly gates with open arms and a cold one! Memorial contributions in Bill’s name may be made to the Canisteo Vol. Fire Dept. 14 South Main St. Canisteo, NY 14823.

A Memorial Tree was planted for William
We are deeply sorry for your loss ~ the staff at H.P. Smith & Son, Inc. Funeral Home - Canisteo
Join in honoring their life - plant a memorial tree
Online Memory & Photo Sharing Event
Online Event
About this Event

Share Your Memory of
William
Upload Your Memory View All Memories
Be the first to upload a memory!
Share A Memory
Plant a Tree