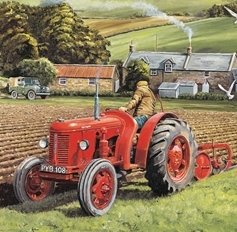 Leo was born December 2, 1927 in Hornell to the late Thomas and Ruth (McAllister) Coleman. Sixty-six years ago on May15, 1953 in Rexville he married the former Barbara Jean Ordway who survives and resides in Rexville.

Leo was a life-long resident of Rexville where he owned and operated the L.E.C. Dairy Farm. In his younger years he was one of the original members of the West Union Wildcat Softball team playing first base. Outside of farming he was an avid hunter and outdoorsman, served on the Whitesville School Board of Education for 8 years and was also on the Agway Committee Board in Whitesville. Like many farmers who had their favorite tractors Leo was no exception. He had a 1944 Farmall M that he was very fond of and would compete in area tractor pulls and won many events with his tractor. Very seldom did he get beat in his class.

He was predeceased by a grandson Jarred Coleman, a brother Francis Coleman and nephews Frankie and Thomas Coleman.

The family will receive friends for a short period of time from 11 am to Noon Saturday,  October 26, at St. Mary’s Catholic Church in Rexville where a Funeral Mass will follow visitation at 12:30 pm. Burial will be in St. Mary’s Churchyard Cemetery at the convenience of the family.

Burial will be in St. Mary's Churchyard Cemetery at the Convenience of the Family

Share Your Memory of
Leo
Upload Your Memory View All Memories
Be the first to upload a memory!
Share A Memory
Plant a Tree